First of all, I'd like to thank Jasmine Haynes for tagging me in this fun blog hop to featuring our upcoming heroes.

A word about Jasmine first:


I'd like to present Game on in Seattle, a new series featuring Seattle sports teams, hot men, and strong women. 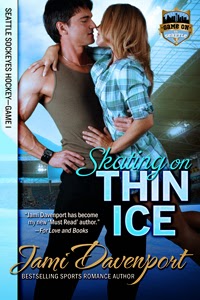 Skating on Thin Ice (Seattle Sockeyes--Game on in Seattle #1)


Projected release date: September 29
He trusts his gut, she trusts her numbers, and neither trusts the other, as a billionaire's mission to bring hockey to Seattle clashes with his passion for the woman who holds his heart.
Now to meet Ethan...
1) What is the name of your character? Ethan Parker
Is he/she fictional or a historic person?  No
2) When and where is the story set? Gainesville, Florida, and Seattle, Washington
3) What should we know about him/her? Ethan is a young billionaire with a mission to bring a professional hockey team to Seattle.
4) What is the main conflict? What messes up his/her life? He buys a team during the season with plans to move it to Seattle, but the league forces him to keep the sale a secret. Because he's an enthusiastic, hands-on owner, he goes undercover to study his team during the playoffs. While undercover, he works closely with a female staff person and learns about the team's weaknesses through her. He uses that knowledge to clean house once the sale is announced, which destroys her fragile trust in him.
5) What is the personal goal of the character? His family has prided themselves on always giving back to the community, bringing hockey to Seattle is Ethan's way of giving back.
6) Is there a working title for this novel, and can we read more about it? Skating on Thin Ice, and you can read more about it at any of the presale locations.
7) When can we expect the book to be published? September 29, but it's up for presale now.
Up Next in the Character Blog Hop on Sept. 1 is Roz Lee.

Roz has been married to her best friend, and high school sweetheart, for over three decades. Roz and her husband have two grown daughters (and a new Son-in-law) they couldn’t be more proud of. They are currently raising a thirteen-year-old Labrador Retriever, Betty Boop, who isn’t aware of her canine heritage.

Even though Roz has lived on both coasts, her heart lies in between, in Texas. A Texan by birth, she can trace her family back to the Republic of Texas. With roots that deep, she says, “You can’t ever really leave.”

When Roz isn’t writing, she’s reading, or traipsing around the country on one adventure or another. No trip is too small, no tourist trap too cheesy, and no road unworthy of travel.
http://www.authorrozlee.blogspot.com

Skating on Thin Ice sounds great, Jami! I can't wait to read it!

Thanks for tagging me, Jami! Skating on Thin Ice sounds wonderful. Best of luck with the new release!