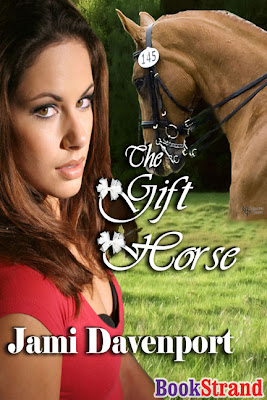 Here's a blurb:
Never look a Gift Horse in the mouth?
CARSON REYNOLDS would dispute that statement. After all, it was a gift horse that got him into this mess in the first place. Carson has never backed down from a challenge, but he’s never faced a challenge like this one. It’s the project nobody wants. It’s doomed to fail from Day One because of lack of money, lack of planning, and no lack of a difficult, interfering sister. Carson’s mission is to transform a run-down horse farm into THE premium horse training facility in the Pacific Northwest and transform the disorganized resident horse trainer with a penchant for self-sabotage into a confident, professional equestrian of international caliber. Unfortunately, City Boy Carson doesn’t know one end of a horse from the other, and the large creatures scare the heck out of him. His situation is compounded by a love-sick, 1500-pound mare with a crush on him , his growing attraction to the grungy horse trainer, a disruptive sister who insists the trainer be fired, and a demanding father who has lost faith in his son’s abilities.
Tired of running from herself for six years, SAMANTHA MACINTYRE has returned to the scene of a horrific barn fire allegedly caused by her carelessness. She accepts the head trainer position at that run-down facility with the hope of defeating her demons, proving her innocence, and earning a permanent position at the new equestrian center. With lofty aspirations, but no money and no horse, Sam will do anything to ride the talented, though difficult, horse Carson received as a birthday gift from his family. But first, she must pass the test: compete the horse for one season, impress Carson, and best his sister’s preferred trainer.
As Sam gets closer to the truth regarding the cause of that long-ago fire, small mishaps begin to escalate into larger, more serious, accidents. Carson’s horse knows the real perpetrator, if only those dimwitted humans would listen. With no where else to turn, Sam confides in Carson and together they delve into the actual cause of the fire. With the help of an opinionated equine, they face a surprising reality--that love is more important than ambition, money, or blue ribbons.
Posted by Jami Davenport at 3:13 PM No comments:

I just had to share, I found three great reviews for my books today.

First of all Molly from Molly's Musings at http://mjdaniels.blogspot.com/2009/01/yesterday.html. She had this to say about "Who's Been Sleeping in My Bed?"

I LOVED Who's Been Sleeping in My Bed by Jami Davenport! Go over to Siren Books and pick up your own copy:) I think I'll pop over to her website and see what else she has published! I loved the family interaction; I loved the climactic scene. She did a fantastic job of weaving all the elements together, AND made me curious enough about the islands to call my sister and see if she's ever been there.

I will be adding The Dance to my list of books to be reread several times over. Ms. Davenport just became an author that I will most definitely be adding to my automatic To Be Read Book list. I was amazed at the detail she put into this story. I am giving The Dance five stars for the excitement and perfection that it turned out to be.

And last but not least, Joyfully Reviewed game me 5 stars on Amazon for The Dance.

I've been thinking about some topics for my blog for 2009. Last year I did a workshop for my local RWA chapter on why I chose to go with a small press. I thought some of my readers who are aspiring authors might benefit from the research I did when I put this workshop together.

So over the next month, I'll outline the following (not necessarily in that order):
So stay tuned for the first installment.
Posted by Jami Davenport at 8:28 PM No comments:

Labels: e-publishing, Ebooks, pros and cons of epublishing, Writing for a small press

I hope 2009 finds you happy and healthy.

Despite the bad economy and some personal sadness in my life, 2009 was a very good year for me professionally. SirenBookstrand bought the first two books of my Evergreen Dynasty series, Who’s Been Sleeping in My Bed? and The Dance. Both books have received several five-star reviews and sold well with my publisher and distributors.

I’m anxiously awaiting the publication of my third novel, The Gift Horse, which is #3 in my Evergreen Dynasty Series. I’m very excited about this book, which is a mainstream equestrian romance with a hint of a mystery in it. It’s due to be released early this year.

I’ve completed rough drafts of two other novels, both with football heroes. Both books are much hotter than my previous novels. I fell in love with my hero in Fourth and Goal. He’s been rattling around in my head for years. I’m thrilled that he finally found a home on the pages of a book.

I’m hoping that 2009 brings even better things for me in the writing department. I’m hoping to expand my horizons and challenge myself to write even better books and to write more on a regular basis. I’d like to further my career by increasing my readership and my exposure.

It’s my goal to complete two or three full-length novels this year and two to three novellas.

I guess I'd better get back to writing.

Have a Happy New Year!!!
Posted by Jami Davenport at 10:02 AM No comments: