My Thanksgiving Present: Fourth and Goal has a Home

I am VERY happy to announce that I've contracted with Loose Id to publish my football hero romance, Fourth and Goal, the first book in my Seattle Lumberjacks Football Series. Finally, a new Jami book will be out next spring or early summer (tentatively).

While I don't personally believe in "books of my heart" (as every book should be the book of an author's heart if she's putting her soul into the book), but this book comes close to being that book. Fourth and Goal has been floating around in my head for close to fifteen, maybe twenty years. I've written and discarded pieces of it over the years, put it on a back burner when I found out NY pubs believe sports hero romances don't sell, and a few years ago decided to drag it out. To heck with what does or doesn't sell. After all, I also write equestrian romances, and those don't "sell" either.

I love football, and I know other women love football, too. According to statistics, an estimated 45 percent of NFL fans are female. So do NY publishers think these women don't read? And don't read romance novels? I beg to differ.

The few football hero romances currently published annoy me because the heroines usually hate football and/or know nothing about it. I wanted to write a romance novel series for women who love football, have a decent knowledge of the game, and want to read about a heroine who knows her football.

Rachel, my heroine, grew up in a football-crazed family with a coach dad and football player brothers. She has an uncanny eye for evaluating football talent and diagnosing a player's strengths and weaknesses. She aspires to be a pro football scout.

The book follows Derek, an almost washed-up football player, through his and his team's journey from basement dwellers to Super Bowl contenders.

I'm hoping there's a market for a book like mine. Time will tell, but I'm putting my faith in all those female NFL fans.
Posted by Jami Davenport at 3:05 PM No comments:

This is Khat. The barn cat who wanted no part of being a barn cat. Now he owns the house. Khat is the star of my latest WIP and Book 2 in my football romance series.

This picture says it all: 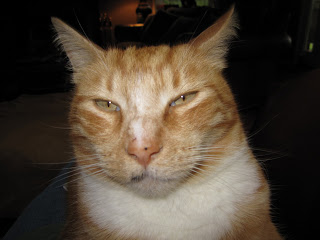 Posted by Jami Davenport at 1:12 PM No comments:

I was pleased to see that Lisa Kleypas, one of my favorite historical authors, has a new short contemporary novel set in Friday Harbor, called Christmas Eve at Friday Harbor. I purchased it for a Thanksgiving weekend read, but I couldn't hold off that long. I read it yesterday. I loved Lisa's descriptions of San Juan Island and Friday Harbor. I loved her characters in this book also. My only complaint is the book was too short. I hope the remaining books in this series are full-length novels. I wanted more of Mark and Maggie's story!

Lisa is doing a Friday Harbor series on three brothers. I can't wait to read them all.

Coincidentally, my hubbie and I are spending Christmas at Friday Harbor this year. We usually go there for Thanksgiving, but we have other plans so it'll be Christmas.
Posted by Jami Davenport at 8:26 PM No comments: