I'll be at the Emerald City Writers Conference Romance Book Fair on Saturday, October 2, from 4 to 6 pm. Drop by, win a Kindle, and buy a few books. A portion of the proceeds will be donated to DAWN (Domestic Abuse Women's Network).
. 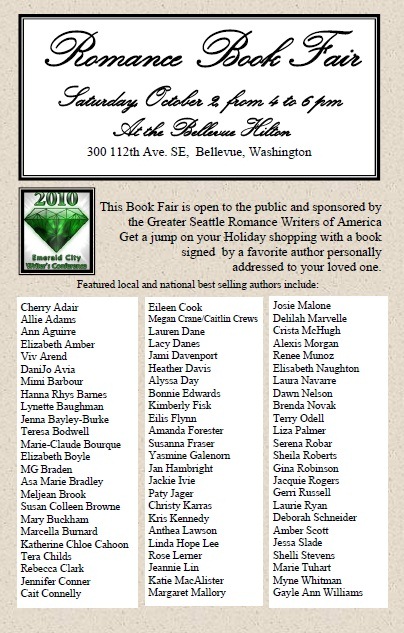 Posted by Jami Davenport at 4:46 PM No comments:

I've had a semi-productive summer. While I didn't finish many books, I started several.  ;)  I'm finally back in my zone and able to write like I used to be able to write. In other words, truly get into the characters' heads and become my characters.

I've started a new series, Seattle Lumberjacks Football Series. I've been shopping Fourth and Goal around since March. After two tough rejections and some excellent, detailed feedback from an editor, I gutted the plot and started over. I'm within three chapters of finishing my second set of edits. After that, F&G will be back out on the street again, looking for a good home. The Lumberjack series has been in my head for close to fifteen years. As a big football fan, I truly believe there can be a market for football romances. According to statistics, forty to forty-five percent of NFL football fans are women. So some of those women should be interested in romance with a football hero, don't you think?

My book will be different from most sports romances in that one of the subplots involves the team's journey to the championship. Most romances gloss over the sports part of the hero's life. Not me, I LOVE football, and I want the game to be an integral part of my book.

I am so excited to see F&G published, but it's importnat for me to find the right home for it, a task I won't take lightly.

I'm halfway through Book 2 of the series, involving an animal communcator heroine, a bad-boy quarterback, and a spoiled orange tabby cat.
Posted by Jami Davenport at 7:39 PM No comments: