I lost my older sister yesterday. She was 58 years old. She'd battled brain cancer for years. For a while, she'd been winning. Yesterday, she didn't.

Yesterday, I received a call from the hospital near the nursing home she'd been living in for the past 2 years. She'd been in the hospital since Sunday night. I had no idea she was in such bad condition, or I would have made the 4-hour drive sooner. I'd been told she had a urinary infection. What she really had were massive blood clots in her heart and lungs. No one at the hospital told me that until it was too late.

My husband and I rushed up there right after the doctor called. He didn't hold out much hope that we'd make it. We didn't. We were 1/3 of the way there when the doctor called us to let us know that she'd suffered a fatal heart attack.

My sister was 9 years older than me, never married, never had children. For the majority of her life, she'd raised Rottweilers and was the founder of Ebonstern Kennels. She loved those dogs more than anything else in her life and dedicated her entire life to them. Ebonstern had a reputation of raising high quality dogs. My sister was very picky about who bought one of her dogs. I used to say that it was easier to adopt a child than to pass her stringent "vetting" of prospective parents for her beloved puppies. She was a responsible dog breeder and had an extensive contract she required that new owners sign. Only show quality dogs could be bred if they were AKC champions. Her pet quality dogs were to be fixed.

One of her "babies" still lives with us. He is partially blind and deaf but seems happy and healthy for a 16-year-old Rottweiler.

So what does this have to do with writing and books? Nothing on the surface, but my sister instilled in me a love of books from the day I was born. She was an avid reader. What a shame that she couldn't read in the last few years of her life. That is her legacy. That, and her beloved Ebonstern rottweilers.

May she finally rest in peace and live happily in heaven with her canine children once again.
Posted by Jami Davenport at 11:10 AM 3 comments:

Orca Whales and The Dance 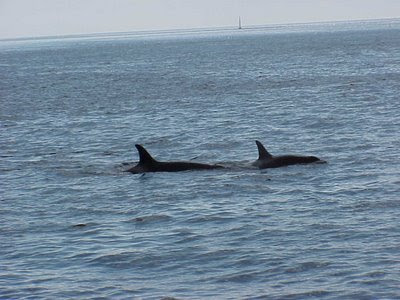 I was asked by a fellow author if I'd ever been whale watching. To be honest, I did go on a commercial whale watching boat once, but I have seen them several times on my own boat.

Over the years, my ex and I had been VERY fortunate to spot Orca Whales in the San Juans many times. Unfortunately, the best pictures were taken on a 35mm camera. This is my best one taken on an old digital. Anyway, on this one occasion, we were crossing the Straits of Juan De Fuca, heading for the San Juans. In the distance we saw a huge gathering of boats, which means one of two things, good fishing or whales.

We kept our course, out in the middle by ourselves. Neither of us wanted to participate in that frenzy that often follows the whales because we didn't believe in harassing these magnificent creatures. More often than not, the whales found us. We didn't need to pursue them. This time was no exception.

I'd put on Jimmy Buffet because the joke was the the Orcas loved jazz and Jimmy Buffet and would come to the boat if you did that. Next thing we knew, we were surrounded by a pod of 16 plus Orcas with a few babies thrown in. We shut down the boat and floated, while they frolicked and played around us for about 30 minutes, giving us a private show. It was INCREDIBLE, a moment that would bring tears to your eyes. One of them went under the boat and surfaced no more than 5 feet from it then leaped into the air for us.

In The Dance, I have a scene where a cynical Rico loses his cynicism when he encounters these whales. They play a small, though important part in the book that is somewhat mystical. You'll have to read it and see what you think.
Posted by Jami Davenport at 12:50 PM 1 comment:

Contest for The Dance--Win this Gift Bag 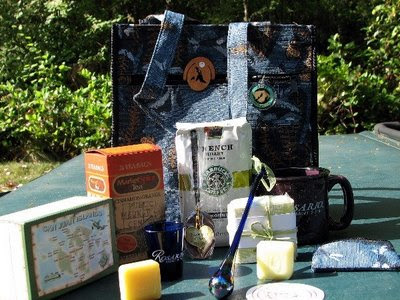 Check out this link or read below for how you can win a San Juan Islands gift bag. All entries must be received by Friday, June 11, at 7 am Pacific time. I'll announce the winners at 9 am tomorrow.

Using the listed links, answer these five questions. Send your answers to jamidavenport@att.net before 7 am Pacific time on Friday morning.

Each correct entry will receive their name in the hat for the drawing to win this gift bag, which includes: An Orca Whale cloth tote bag, three types of soaps, Starbucks Coffee, Pike Place MarketSpice tea (for the tea lovers), Rosario mug and shot glass, chocolate spoon for stirring your coffee, a glass ornament, Orcas Island keychain, and a wooden Orca Whale bookmark.

The winner will be drawn and announced on Friday morning at 9 am Pacific time.

The hero has two names, what are they?
What is Mariah’s horse’s name and what does it mean?
What does Rico want to do to his neighbor?
What is the name of the Island that is the setting for the book?
What are the San Juan Islands known for?

Where to find the answers:

Posted by Jami Davenport at 10:29 AM No comments:

Join me tomorrow at Siren Readers Yahoo Loop for the release of The Dance. I'm giving away one more San Juan Islands gift bag. Check out my website or blog tomorrow for details on how you can win.

Hope to see you there.
Posted by Jami Davenport at 7:09 AM 1 comment: