Thanks so much to Kim at Hot Damn Designs for the design on my romance trading card for Fourth and Goal. 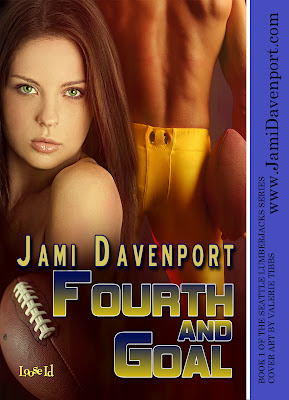 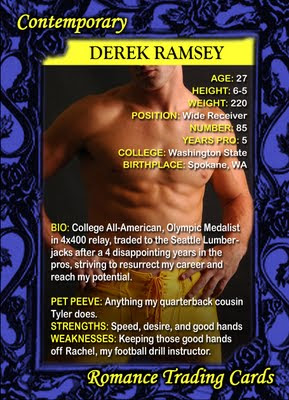 Posted by Jami Davenport at 6:57 AM No comments:

In a game played on and off the field, only one of them will emerge the winner.
Armed with an uncanny ability for evaluating football talent, a dogged determination to succeed in a man’s world, and an empty bank account, Rachel McCormick agrees to help struggling wide receiver Derek Ramsey get his game back. Rachel believes Derek, her former best friend and lover, knows the truth behind a points-shaving scandal which ruined her father. She vows to expose the secret even if it destroys Derek in the process.
When Derek’s coach suggests sex as an excellent tension reliever the night before a game, Rachel takes one for the team. The next day, Derek has the best performance of his not-so lustrous pro football career. As Derek and Rachel rack up nights in bed and other places, the team racks up wins on the field. Rachel is torn between her loyalty to her father and her growing affection for Derek. Now it’s fourth and goal, one second left on the clock. Their hearts are on the line. Do they trust each other enough to go for the long bomb or do they get dropped for a loss? 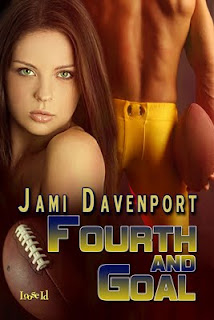 Available on May 3rd from Loose Id


It’s fourth and goal, one second left on the clock. Derek and Rachel are racking up points in bed. Do they trust each other enough to go for the long bomb or do they get dropped for a loss?

I now have a "Coming Soon" page for Fourth and Goal at Loose-Id. The countdown is on. F&G will be available on May 3.

My book page is at: http://www.loose-id.com/Fourth-and-Goal.aspx

I'm so excited about this book. It's my first Jami book in over two years. I'm hoping to have the sequel done and released also this year.
Posted by Jami Davenport at 7:01 PM No comments:

I heard this on the radio last week:

Teenagers who read at least one book a month are much more likely to have rewarding careers in their early 30s. I can't remember the percentage, but it was high, something like 30 to 50 percent.

So for all those people out there who turn their noses up at romance novel readers or consider romance garbage, keep this in mind: reading is what's important. Not what you read. Reading romances can be just as important to your future as reading a literary novel or a non-fiction book.
Posted by Jami Davenport at 6:58 AM No comments:

Sneak Peak of Fourth and Goal

I'm excited to annouce that Fourth and Goal is out of the editing stage and moving on to final copy edits. Tentaive release date is the first week of May.

Click here to read the first chapter and wet you appetite for more.
Posted by Jami Davenport at 8:07 PM No comments: