I want to wish everyone a MERRY CHRISTMAS!!!

Really good things have happened to my husband and me in the month of December. For starters, we went to Hawaii for a week and stayed with dear friends of ours.

Then we heard from someone that we thought was lost to us. That WAS the best Christmas present ever.

Lastly, is news I can't report yet. Hopefully, within a week I'll have BIG news to report.

Here's wishing all of you a Merry Christmas and Happy Holidays!!!
Posted by Jami Davenport at 7:29 AM 1 comment:

Yep, we're back in the Northwest. Back to reality. Back to life in general.

Back to riding. (I haven't been on my horse in two weeks!)

Back to finishing my latest manuscript, "The Gift Horse."

Back to waiting. (Waiting to hear from publishers as to whether or not they're interested in my last manuscript.)

Back to the animals--who were quite happy to see us.

Back to the Christmas season, which I honestly didn't notice in Hawaii, other than a few Christmas lights and some Hawaiian Christmas songs on the radio.

I loved Hawaii, but I still think that the Northwest is the greatest place to live in the world, and I'm one of the fortunate ones.
Posted by Jami Davenport at 10:19 PM No comments: 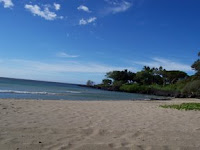 Our last full day in the Islands. BUMMER!!!!
Debbie and I were all dressed and heading out the door for a horseback ride on the range when the guide called. They had to cancel the ride as it was raining vertically and blowing on the other end of the island.
So we headed instead for the beach. The water was great, but the wind was blowing sand all over. It brought back memories of the wind in Pullman, Ugh. All you Cougars out there know exactly what I'm talking about. 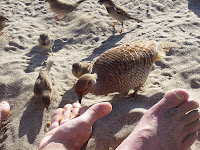 This particular beach was considered the nicest on the island, and I would see why. The resort hotel at this beach has been closed since the last big earthquake because of extensive damage. They only allow 30 cars a day into the parking lot to use the beach, so combined with the wind, there weren't many people there. Dennis managed to make friends with a few local residents: Feed them and they will come! See picture on the left.
After that, we took the boat ride around the lagoon at the Hilton then came back to Doug and Debbie's for another excellent dinner prepared by Debbie.
So now it's off to home and back to cold weather and rain. Oh, well. The memories of the good times and good friends will be with us always.
Hope you enjoyed out little reports. If you'd like to read more about Cabana Boy's adventures, leave a comment, so we can encourage Doug to write. You can choose the "anonymous" feature if you don't want to setup a Google account.
Aloha
Posted by Jami Davenport at 10:01 AM No comments: 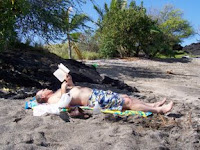 Dennis and I went to the beach while Doug and Debbie went to work on Friday AM. It was a lovely little cove that you have to hike into over lava flows. After that we walked a short distance to a marina and met them at a pub for lunch.

We had great plans for the evening, but they never materialized as we were all content to just eat here and hang out for 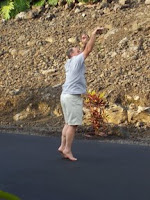 the night watching Hawaii 50 and CSI-Miami, and the boys played a little ball.

Doug is reviving the Cabana Boy Adventure Series. Hopefully, he'll start his own CB blog.
Posted by Jami Davenport at 9:50 AM No comments: 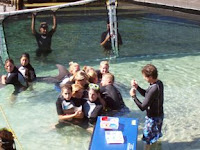 Guest Blogger, Dennis:
Once again we packed our useful items into the car and off to the Beach. We arrived at the Hilton Hotel to see all the beauty we had heard so much about. It was picturesque to say the least and one of the first things you see upon entering is a huge parrot, frosted pink in color, perched in his stand. We scratched his back awhile, talked to him, then walked around the enclosed waterfront where people were swimming, snorkeling, and basking in the sun.
Ah, alas, we reached our destination; the bar where we ordered lunch, a few drinks and prepared to watch the show which we were clueless about, until a lady informed us that they were about to obtain some data from a 9 week old dolphin; something they do every month. They measured, weighed, and took some blood samples as we watched from our front row seats. Our next destination was the beach; what more can I say! After a quick swim and a bit of snorkeling in the clear blue waters, we came back to prepare for the adventure we all had been looking forward to; "Captain Bean's Cruise". Arriving at our destination we encountered beautiful hula dancers greeting us and servers attending to our every need. Once aboard, we were soon greeted with Mai Tai's and smiles from all the natives, having as much, if not more, fun than we were. The band kept playing the whole time as we began to embark upon our 3 hour tour.
The show was absolutely amazing and the entertainment was quite professional, right up to the end where they encouraged us to get on stage and dance with stars, to which I needed no encouragement at all. Doug and I were having more fun than God allows but we were entertaining in our own rights; at least we thought so. It was then I realized just how many drinks we consumed and felt the strains of remaining vertical. Thankfully, the 3 hour tour was only 2 and we were pulling up to the port. I know I could not have taken another hour; I was spent, with fun had by all. How can one expound upon that.
Posted by Jami Davenport at 11:38 AM No comments: 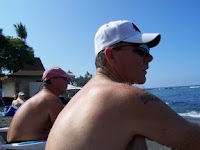 Waking up to the smell of coffee brewing is one of the better things in life, don't you agree? As we were drinking our Kona coffee on the patio we began to consider our options for today while eating freshly cut pineapple Doug brought us. Shortly thereafter Pam and Doug went for a brief but exhausting walk as I held down the fort with my book and coffee in hand.

The Beach; that seemed to be the option we chose so we packed the car with all the necessities and off to the sands and blue waters of Kona. I entertained the crowd as we drove by singing Hawaiian songs, not really knowing any words, so I made up my own.

It was beautiful! Watching the surfers and boogie boarders sitting on their boards, waiting for the next big wave that would wisk them away, paddle themselves back out and repeat the process over and over again.

Doug and I popped a top and watched as Pam began the arduous task of reading her book. We could wait no longer and, with that, we donned our snorkeling gear and into the water we went. 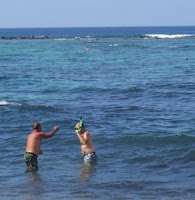 It was as if we were participants of the Jacque Cousteau program, swimming with the multicolored fish, totally unconcerned of our presence, eating whatever it is they munched on. Doug and I came back in for a quick break and as I was sitting on the beach I saw a turtle head pop up out of the water, disappearing as quickly as it came. I needed to investigate so I hopped in my gear and found my quest swimming along lazily, oblivious to my presence. I yelled to Doug, "Huge Turtle", and he came out to see for himself. At first glance Doug said that's just a baby and went back down to get a better look, resurfacing to say, it's a big one! We spent some time just swimming with it and catching a ride as he swam along foraging for food, totally carefree, still unconcerned with our presence.

After 3 hours of swimming, snorkeling, and observing the abundance of beauty, we decided to eat lunch at Huggo's on the water. From there a quick stop at Boarder's book store, then home again to catch a nap after such an exhausting afternoon. I'll tell ya, it's a tough job but somebody has to do it. Just another day in paradise.
Posted by Jami Davenport at 10:10 AM No comments: 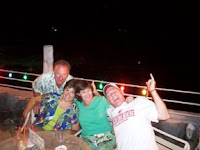 Well, we did the lazy thing on Tuesday and hung out at Doug and Debbie's house until Debbie got off work. So we spent the day laying around and reading. I went on two walks around the neighborhood. Pheasants and wild turkeys made a trip through the yard. 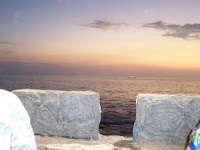 We went out to dinner, sitting outside with the waves crashing into the wall at our feet. We saw a spectacular sunset.

Aftewards, it was off to a beach bar for a drink or two, then home.
Posted by Jami Davenport at 9:29 AM 2 comments: 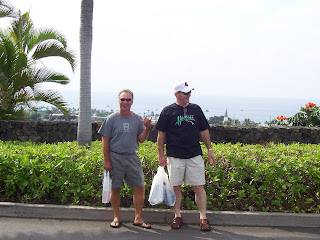 Dennis and I flew into Hawaii (the Island of Hawaii) on Sunday afternoon. We're visiting our friends, Doug and Debbie, who moved here last April.

Doug and Debbie have a gorgeous house that sits 1500 feet up and overlooks Kona and the ocean. It hasn't gotten below 67 since we've been here. A rain squal came through last night, but other than that, it's been perfect weather.

Yesterday, Dennis and I started the day off at an open-air cafe in downtown Kona for breakfast, while Doug was at the dentist. He picked us up, and we made a stop at Wal-Mart for some shorts and tank tops--items we couldn't buy at home this time of year. You would not believe the view at from the Wal-Mart parking lot--checkout the above picture.

From Wal-Mart, we made a quick stop for fuel at some resort, can't remember which one, then tried to get into Muana Kea Resort's beach. Since it's limited to 30 cars, we were a little too late. So we backtracked a few miles to Hapona Beach. 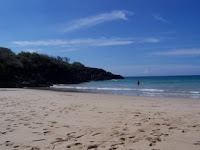 Dennis and Doug had a great time swimming and boggie boarding. Doug and Dennis are the two little dots in the water in this picture on the left. Click on it to enlarge it.
From there, on to Waimai. Dennis and I bought Christmas gifts at the Parker Ranch store, while Doug had a business meeting. Parker Ranch is the largest ranch in the US. The countryside is beautiful. It could be Eastern Washington during the spring when the hills are green. In fact, I could envision the Cartwrights (from Bonanza) riding over the ridge. You'd never believe you were in Hawaii. Debbie and I are hoping to do one of the trail rides on Saturday that covers the rangeland.

Then it was back to Doug and Debbie's for dinner and a beautiful night talking with friends and enjoying the evening. 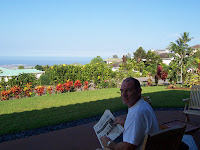 Here's Dennis reading the morning paper on Tuesday morning on Doug and Debbie's lanai.
Aloha, more later....
Wish you could all be here.
Posted by Jami Davenport at 1:11 PM 3 comments: