Merry Christmas--Unedited Excerpt and Cover Revel for "Roughing the Passer"

Merry Christmas to everyone out there. I hope you're staying warm and enjoying yourself with friends, family, and once the craziness dies down, a good book. Just to get you jump-started for 2014, I'm revealing the cover the "Roughing the Passer" along with an unedited excerpt for this novella due out in spring of 2014. 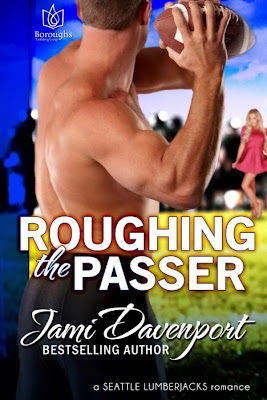 Tyler Harris, star NFL quarterback, not-so reformed bad-boy, and dedicated boyfriend staggered into the bar and bounced off a couple tables. Steadying himself with a hand on a stranger’s shoulder, he pushed off and let momentum carry him the rest of the way. His buddies and fellow teammates looked up at him in unison. Tyler shoved one of them over in the booth and collapsed onto the cushion.

The men swam in front of his eyes, blurring and moving in ways that made his head dizzy. Why the fuck didn’t they just sit still?

“You didn’t drive in that condition, did you?” Asked his cousin, Derek Ramsey, in his usual tight-ass, follow-the-rules manner.

Tyler sneered at him. “I took a taxi.”

“What has you so fucked up tonight?” Zach Murphy studied him, as if he couldn’t quite decipher Tyler’s problem.

“She left me.” The words caught in his throat and came out sounding pathetic and strangled.

Silence as the guys looked at each other in turn, telegraphing silent messages via their eyes and body language, born of thousands of hours on the football field together. Tyler understood because he’d been there, too. Except usually those secret messages included him. Today they shut him out, and he didn’t like it one damn bit. In fact, he hated it, hated being left out in the cold, but even that didn’t compare to the pain stabbing his heart with a relentless ruthlessness, as it drove him to his knees. Figuratively speaking.

Zach, the rat bastard spoke first. “Lavender finally got a brain to go with that beauty and kicked your ass to the curb?”

Tyler tightened his jaw and ground his teeth together, refusing to respond to the insult. Murphy had gotten a little too big for his britches after he’d retired from football a month ago and accepted a position as the Jacks’ linebackers coach. In fact, he’d become an insufferable ass.

Derek shook his head in shock and muttered, “I’m sorry, man, but you had it coming.”

Fuck that, a guy couldn’t even get a little respect and sympathy from his own cousin.

Bruiser Mackey snorted his drink through his nose—he’d been hanging out with no-manners-Murphy too long. “I saw this coming a year ago. You should’ve given the woman a ring, you fuckhead.”

Tyler fisted his hands, fantasizing about how good it would feel to slam his fists into Bruiser’s smug face. Just because the asshole pretended to be happily married didn’t mean the rest of the world was that stupid. Or were they?

Looking at each one of his buddies—his partners in crime—the guys who stood by him on and off the field, Tyler got the distinct feeling they thought he was the dumbshit. Tyler didn’t like being the dumbshit. After all, he’d grown beyond that—thanks to she-who-would-not-be-named. Hell, he’d embraced his sensitive side as much as he fucking could with her insistence. He’d even given her free rein to do damage to his extensive credit limit.

What more could she want?

Like he didn’t know that answer to that question.

She wanted the one thing he just flatout could not give.
﻿
Posted by Jami Davenport at 7:19 AM 1 comment:

An early Christmas present for all of you out there. Here's an unedited version of the first few pages of Time of Possession:

Brett Gunnels had an intimate relationship with his clipboard.


After all, that clipboard was where he played his game, not out on the football field. Every Sunday during the season he could be found standing on the sideline, clutching his worn clipboard and making notes.


Today, like any day, Brett held his clipboard and roamed the sidelines, calling out to the Seattle Lumberjacks starting quarterback when he saw something. Not that Tyler Harris would hear him or listen if he did. A couple penalties set them back to the 49ers’ forty-yard-line on third and twenty-five, fifteen seconds on the clock and out of field-goal range.


Harris took the ball from center and stepped back, staying in the pocket with the coolness and finesse of the elite quarterback he was. A second later, the pocket collapsed around him, he scrambled, running for his life while looking for an open receiver, only every one of them was covered. He never saw the guy coming from his blindside.


Brett cringed, as a 49ers’ linebacker put a vicious hit on Harris. The Seattle Lumberjacks quarterback was known for his toughness, but from Brett’s point of view, knees didn’t bend like that.


As his teammates returned to the huddle, a couple of them looked toward Harris, as if expecting him to bounce to his feet because he always did. Sprawled on his back, the two-time championship quarterback didn’t move. Not even an eyelash.


A hush came over the crowd, eerie in its silence, while a cold wind of fear blew through the stadium. Harris’s cousin and the Jacks number one wide receiver, Derek Ramsey, knelt beside him, as the coaches and trainers hurried onto the field. The offensive line huddled nearby, pretending not to stare but doing so anyway, worried etched on the big guys’ faces.


Brett might not like Harris much—not many guys did—but his grudging respect for the guy’s talent and try overrode any personal issues he might have. Besides, no one wanted to see a teammate laid out on the field like that. An icy shiver radiated up Brett’s spine as his brain transported him to another time, sand stretching as far as the eye could see, another body not moving. Nothing. Not even an eyelash. Just like Harris was now. Brett shook his head, forcing those memories back into the compartment they’d briefly escaped from.


This wasn’t a war zone—well, not exactly—and his teammate was known for his dramatics. He was probably taking a two-minute fiesta at the expense of everyone’s nerves. He’d hop to his feet in a moment and chastise them for being such dumbasses.


Only Harris didn’t. Brett couldn’t stand on the sidelines and do nothing. He ran onto the field to join his teammates. Harris’s chalky face looked like death. Brett swallowed back the fear and bolstered his courage. He’d be okay. He had to be.


After several tense minutes, Harris sat up and shook his head. The team breathed a collective sigh of relief. Groggily, he accepted assistance to his feet, only to have his knees buckle. He went down again, clutching his leg, pain carved into his usually stoic face as he rolled back and forth on the turf. A few seconds later, two linemen helped him onto a cart, and they zipped him off the field and down the tunnel.


Only then did Bret realize the coach was yelling at him. “Get your helmet on.”


Standing on the fifty-yard-line, the guys in the huddle stared at him, their faces expressionless, yet Brett read their minds. They thought he was a fucking idiot. Frantic, he looked for his helmet but couldn’t find it, until Zach Murphy, their all-pro linebacker, shoved it in his hands. Strapping it on as he ran, Brett got to the huddle, only to find the mic in his helmet wasn’t working, and he didn’t have a fucking clue what play to call.


Embarrassed, he signaled for a timeout and jogged back to the sidelines accompanied by a smattering of boos. Great confidence booster for a guy who rarely played a down during the regular season.


Back in the huddle, he called the play, a quick out-pass to Derek, hoping to catch the defense expecting a run because of the quarterback change.


Brett took the snap, stepped back, and tossed an easy throw to Ramsey only to throw it short. A linebacker picked it off and ran it back for a touchdown. Game over.


Frustrated, Brett slammed his helmet to the turf. He didn’t glance at the crowd or the bench. Avoiding the coaches, he sprinted for the locker room to drown his incompetent ass in the showers.
Posted by Jami Davenport at 6:51 PM No comments: