Seduced by the Game--Hockey Anthology to Benefit Cancer 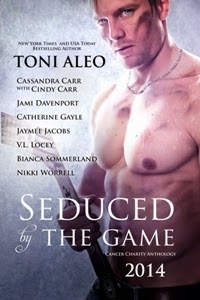 I am thrilled to be a part of this wonderful collection of original hockey romances, penned by several bestselling sports romance authors. You`ll not only be getting eight novellas for the price of one book, but every penny made on the sales from this book for a year go right to Hockey Fights Cancer.


This is planned to be an annual event, with all proceeds going to the charity. All of the authors involved donated our novellas for the anthology, but it didn`t stop there. Cover art, logo design, proofreading, editing, marketing support: it has all been donated. What a great team effort for a truly worthwhile cause!


I’ll keep you updated as the news becomes available, but for now, here’s a teaser from my contribution titled Crashing the Boards, part of my new Seattle Sockeyes hockey series.


Can a party crasher melt the icy heart of a reluctant party guest or will she crash and burn along with her fledgling business?


Professional party crasher, Izzy Maxwell, has been hired to ensure the Seattle Sockeyes team party is a rousing success, while team captain Cooper Black is determined that it will be anything but. Armed with killer heels, a provocative dress, and loads of confidence, Izzy is determined to win over the ruggedly handsome hockey player and save the party and her business.


Seattle Sockeyes team captain Cooper Black can’t get beyond his anger over the new owners moving his team to Seattle, the one place on earth he swore he’d never live. Izzy hijacks Cooper, posing as his girlfriend, and his best buddy plays along despite Cooper’s protests, but Izzy’s persuasive talents, their undeniable chemistry, and a couple of intimate liaisons destroy Cooper’s resistance.


But when Cooper finds out Izzy had been hired to crash the party, and he’s been played a fool, the beginning of something special ends before it starts. Can Izzy convince Cooper to take another chance on her or will they both crash into the boards?


Isabella Maxwell should know. She’d been crashing parties for years, at first to get a decent meal and later—much later—as a part-time profession with her three younger sisters. She’d never crashed a party she didn’t take from dud to memorable in minutes.


She’d done her research and knew the obstacles and challenges, but nothing prepared her for the scene awaiting her on the party deck of the Washington Queen, a local tour boat rented by the Seattle Sockeyes hockey team for an evening dinner cruise around Elliott Bay.


As security checked invitations at the door, Izzy snuck past them and peeked in the doorway, scoping out the scene inside—DJ in the corner, empty dance floor complete with mirror ball and flashing lights, not a dancer anywhere. Hockey players were slouched in chairs clumped around tables, reminding her of pimply faced preteens at a junior high dance. Only these boys weren’t preteens or pimply faced. They were a formidable wall of broad chests, bulging thighs, and determined expressions. Each one mirroring the other, but she’d done her research. There was one man she needed to win over to salvage this party, and he hadn’t arrived yet.


Her sisters had already boarded the boat, managing to sneak past security, every one of them dressed to kill or at least to charm a professional hockey team, Bethany in her plunging Vera Wang gown and deadly high heels. Emma and Avery, the youngest at twenty-one and identical twins, looked every bit like giddy hockey groupies who’d managed to snag an invite to the party. Standing near the buffet table, they giggled and whispered as they stole glances at the players. Several players stared right back. Nearby, Bethany engaged the team play-by-play announcer in conversation, while he stared at her boobs, but men always stared at Bethany’s boobs.


The stage was set.


Time to get this party started. The Sockeyes were going to have the time of their lives if she had to threaten bodily harm with their own hockey sticks.


“Ma’am, I need to see your invitation.” A security guard with a receding hairline, the waist of his polyester pants pulled up to his armpits, and a determined set to his skinny jaw, stepped in front of her before she could enter through the double doors.


“Oh, that.” Izzy made a show of digging through her saddlebag of a purse, not exactly in keeping with her little black sheath, but it served its purpose. “I know it’s in here somewhere.”


The security guard wasn’t the least bit impressed. He tapped his toe on the floor and took a ready stance as if he expected her to run any moment. Just what she needed, a SWAT team wannabe. She batted her eyes at him and continued to dig in her purse.


“Ma’am, you’ll need to leave the boat until you can find it.”


She laughed and tapped on his name tag with one perfectly manicured finger. “Now, Carl, you just hold on one teensy bit. We’ll get this straightened out.” Izzy slipped into her fake Southern drawl; it brought most men to their knees.


Not Carl. In fact, not one hair quivered on his mustache. “My orders are strict. No one, not even the governor, gets in without an invite.” He wrapped scrawny fingers around her arm and pulled her none too gently from the doorway. He might look like a wimp but the guy was surprisingly strong.


No matter. She’d switch to Plan B.


“My boyfriend will be here any moment. He must have the tickets.”


As if on cue, her target for the night walked up the ramp and onto the boat. Cooper Black. The captain of the newly christened Seattle Sockeyes, and the most outspoken man on the team against the team’s move and current situation, which he hated—the very man Izzy needed to tame tonight for this situation to turn around.


Judging by the stubborn set of his jaw and those steely blue eyes, this wasn’t going to be easy.

Thanks for supporting this great cause!

I loved the shorts and the cause I'm a big hockey fan.Love the sport to death but i ant find when the next Seattle Sockeyes Hockey is coming out by Jami Davenport I need to know what happens to Izzy & Cooper Help !!

I loved the shorts and the cause I'm a big hockey fan.Love the sport to death but i ant find when the next Seattle Sockeyes Hockey is coming out by Jami Davenport I need to know what happens to Izzy & Cooper Help !!

Hi, Kit, I'm working on Book 1 right now (Crashing the Boards was actually Book 1.5). Book 1 starts with the team in Florida and about to be sold and moved. It features the new owner and the asst. director of player personnel, who is a female with hockey in her blood.

Once that's done, Cooper and Izzy come next. Thanks for asking. You can keep up with my news by subscribing to my newsletter or friending me on Facebook.